I've been loving the game. Keep up the great work! <3

Thanks a million! We look forward to your feedback on Chunker!

I can't enter the tunnel even though I presing F,

I didn't enjoy it that much, as the characer felt stiff, and there wasn't clear indication whether my attacks actually did something or merely collidedwith an inanimate object. I also found a problem in the tutorial where the hunter models don't respawn, potentially causing you to soft lock if you lmc instead of rmc. The quality of the effects are also really bad on my screen, but I don't know if it's just an issue with my computer.

Overall, I'd say it has potential, but seems somewhat lackluster compared to other alphas, which are also shorter. Currently, it is only a 2 out of 5 for me, but it definetly has room to grow

I liked it so much, but the game is for 64 bits, and since I can't switch to 64-bit, I was a little sad because I really wanted to play it, but ok

We are very sad. Are you using 32bit? We are checkingif we can provide more support. Thanks.

Yes, I could change to 64 now, but Windows wouldn't flow as well as 32-bit, and it will take me a while to get another better computer, my system is Intel Atom D525 and GMA 3150

i dont love its is enter the gungeon copy

I liked it, the character, the setting. That boss is sneaky too. :)

It's an honor to do streaming the chunker. We will continue to improve and come to you with more fun game.

Seems too similar to Enter The Gungeon

Try to change the color scheme for the terrain too. Is way too monotonous. Yes, the blue does it's work for the character, when in place with a black/greish terrain.. but i would try something else too (check itten theory)

Thanks for the feedback.

We will continue to make up for the character of "Chunker."

Really good game! the only problem i see is that it falls within the sameness as other bullet hell type games. try to differentiate from that and you have something unique

@Marxxiez Thanks a million! It is an honor to do steaming the chunker on your channel. As you say, we will continue to make up for our lack of individuality.  We will appreciate you keep eyes on us.

i surely will! keep up the good work

A New Boss will appear!  We will release a new version of the demo. We hope you enjoy Chunker.

Hey man! This game is Bad ASS! I've been hunting for a Roguelite to fill the need I have and even just the first run/demo satisfies a little bit of that. I can't wait for the steam release (Wishlisted of course). I love the items, pretty sure I've seen all of them available in the demo and there isn't a single one that I was disappointed in. All the weapons feel good, the synergies are super great. I hope there will be so many more items and weapons keeping with the style you have going. The art is amazing, it's nostalgic for me for sure. I am SUPER pumped for more man, keep it up! I'm sure you hear it all the time, but I'd love to help on a project like this, you got something here. Now, after a few runs I took a few notes for you. It's hard to criticize such amazing potential but it's only to put it's best foot forward:


-On the Menu when selecting options, it would be nice and a little more intuitive to be able to click the back button instead of just limiting it to the ESC key.

-During the tutorial there are a few typos, which I'm sure will be fixed, but more importantly it feels like there are some text screens that are missing. Gambler will seemingly be mid sentence explaining something and then it just moves forward with the tutorial.

-In the tutorial, on the section where you need to learn how to ult (Press Q), it seems you have to get all 4 at the same time or it soft locks you in that section. It also felt like it implied that I needed to charge my ult by killing those things, so I did then soft locked myself, even after killing all 4 it doesn't progress.

-Base camp map I'm sure will be added at some point I hope.

-Fought the elite pico, the purple blob, it felt long (even longer than the end boss), not sure if I fought him wrong but he went through about 10 cycles and ended up killing him with the ult. Would be nice if there was a health guage for the elite? Or some sort of visual progression on killing him (Maybe he goes from purple to red the closer to death he gets? just a thought) He dropped the giant sythe (sweeeeeet), on my first pull with it I got the green eye (as well as some little green blobs), I killed all of them with one swipe but the Green Eye died but didn't die, still animated but clearly dead, just not dead. It also still has him showing up on the map too. I did kill another one later without an issue, I'm guessing it had to do with the timing of his spawn.

-I found the mini-game, shooting the cannon to hit the barrels one (assuming there are others), great idea, unfortunately it doesn't work, it says hit spacebar to shoot the cannon but it doesn't seem to do that. I tried several other buttons, nada.

-In the base, when buying upgrades or new starting weapons, it would be nice if there was a spend all button, or maybe be able to hold click and it spends it all progressively faster. Also, I bought the energy cannon for a run (sweet gun) then came back to use the arrow for the next run and realized I can't get the cannon again if I wanted? I could understand maybe having to repurchase it but that's not an option either (although it would be cool if you could chose from any that you purchased, maybe have them on the table to pick up between runs?) I can definitely see this, the Doctor MJ being a super awesome thing, tons of different options to start a run. I like this idea a lot.

-The hitbox of the arrow for the energy arrow starting weapon feels a bit off, if I shoot someone casing me and they are close it won't hit them, almost like it goes over their head. As I use it I notice the arrow doesn't spawn at my character, it's away from him quite a bit and when a mob is between that spot and me, typically when getting chased , it doesn't do anything to him. (Awesome weapon though, I love that it's piercing) After a run with it and the item synergies it creates I REALLY like this gun, it just feels like it needs some refinement. Some angles when I shoot it doesn't come close to where my cursor is. Sometimes when I shoot at a safe it doesn't register as hitting it even though the animation hits it.

Can't wait for more man! Keep it up, this will easily be the next standard for RogueLites. Is there a discord or devblog somewhere we can get updates for it? I'd love to see what you are working on occasionally, keep that hype and excitement up :)

OwlRoker Thanks a million!!
In fact, your feedback is saving us from death.

We were very afraid before we released this game demo.
"Who will play our game?"
"What should we do if no one responds?"

Because there are players like you who give feedback and opinions about our game passionately, wee get the power to continue development.

Your feedback is very valuable to us and listed on the Chunker Patch Candidate List, and today we will urgently proceed with a total of four modifications and improvements. Patch 100v  is very much your contribution.

We also mentioned your name on the patch list below.
We will continue to revise the four other things that were patched today.  Thank you. 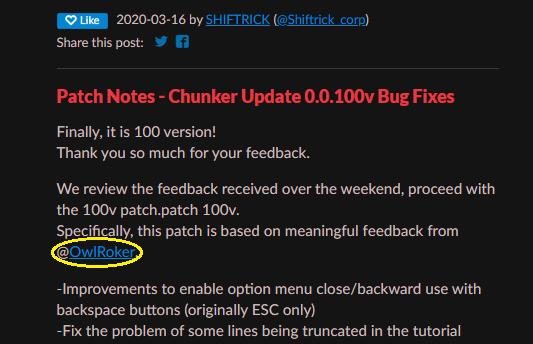 Aww thank you so much! You really didn't need to do that.

You guys are killin' it over there, I really can't wait to see more of this game. I'm craving it at this point. I think I might do a few runs today :)

Thank you for your support! We'll keep running!

I found a visual glitch. After obtaining the Agility perk, which gives you goggles, if you look down, the character no longer has them. Great game anyways!

@PiralTA  Thank you for your feedback. The issue is currently registered on the bug list and will be revised.

We are going to post it when the modification is complete. Thank you!

I'll be sure to share my thoughts once I've given it a go :)

Oh! @superdark! We can't thank you enough. We will wait for your feedback.

So I played the game for a good half hour and this game has a lot of potential! There was a lot things I really liked and some things I think could be improved, I did keep in mind that this is still a demo and I only managed to get to the first boss, so here it goes.

things that could be improved:

All in all I think this is a solid demo and this game has a lot of potential and with a little polish to the art and some tweaks it could be very successful, wishing you the best of luck and I look forward to future updates :)

Amazing! Thanks so much for your meaningful feedback. We will reflect your feedback and develop the game further.

And in particular, the "Grab mouse button" you gave me today was reflected directly in the chunker update 0.0.97v. The patch was completed five minutes ago.

Amazing! I played again and it already feels so much better

Great job and keep up the good work :D

Chunker is still evolving at this moment.  Please give us a lot of feedback. :)

Very nice game! It's a little scarier than Soul Knight (a little harder too)

Glitches I found:
1. If you resize and make the window super thin, the message box at the top shows (On the main menu and other places)...
Edit: Lots of weird things happen when you make the window thin...

2.And also, in one of the message boxes at the top, I think you forgot to put a new line so the title and the message is together (somewhere at the beginning where you have to open the sewer)

The overall game-play is very smooth (for my potato computer) and works very well. I love the shadows made by the torches when you stand near them :)

Requests:
1. Maybe add a little more explanation when you play the game for the first time, like "Press F to go into the sewer and fight monsters"

2. If you can, please make this a local LAN game

That's it! Hoping to see the official release!
Also quick question: Is there a way to add more things to the basecamp?

Thank you for playing your precious time for Chunker. Your valuable feedback will be reflected in Chunker.

And base camp can make you more energetic with the NPC you save in the game. NPC remains with you forever even if you restart the game. As you can see below....(Of course, the image below is an example and may be different from the real version)

Looks crazy! Will you be doing a Linux build?

Thank you! Linux builds will also be ready later and will be announced again!

Awesome, give me a shout on https://www.gamingonlinux.com/ when they're live :)